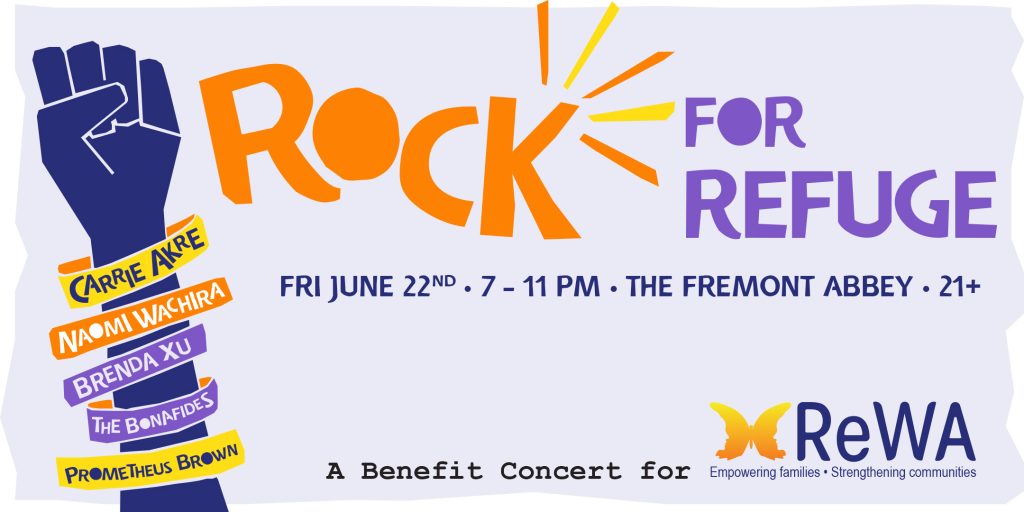 Tickets available on a sliding scale starting at only $5. Pay what’s right for you!

Tickets available at the door — JOIN US!

Carrie Akre is a musician best known for her work with Seattle underground bands Hammerbox and Goodness. With a vocal delivery that is at once aggressive, haunting and melodic, Akre’s style of female rock-vox is comparable, yet superior, to the likes of 80s power-vixens Pat Benetar or Lita Ford, and she is one of the few women to carry that strong vocal flavour into the 1990s with the advent of grunge and the rise in popularity of alternative rock. Since Goodness disbanded in 1998, she has contributed vocals to the project band The Rockfords (which included Pearl Jam’s Mike McCready on guitar), and released three solo albums. Akre’s solo work is a change of direction, with a more stripped back and soulful approach broadening her style as a musician.

Naomi Wachira is a Seattle singer-songwriter who was born in Kenya and grew up singing gospel music in a choir of family and friends. Inspired by the music of Tracy Chapman and Miriam Makeba, Wachira saw the potential for song to make the world a better place and set out to create music that is “poignant, hopeful and life-giving.” Since her arrival on the Northwest music scene, she has received numerous accolades, including being named “Best Folk Artist” by Seattle Weekly, and has cultivated a growing base of enthusiastic fans. She has released three recordings to date–“African Girl EP” (2012), “Naomi Wachira” (2014) and “I am Because You Are EP” (2015)–and her latest album “Song of Lament” was released in June 2017.

Ambient/folk artist, Brenda Xu (pronounced “shoo”), has been building a steady following since her arrival on the Seattle music scene a few years ago. The momentum she created with the release of her last album “For the Winter” in 2014 has led to several successful tours and song placements on MTV & Nickelodeon. Her new album, Overflow, was just added to KEXP’s rotation, and has been receiving airplay and press coverage in countries all over the world. Compare to artists such as Daughter, Bon Iver, and Aimee Mann, her sound has been described as “treading the delicate line between washed-out ambient tones and carefully crafted acoustic arrangements.”

The Bonafides Singer-songwriter David Edward Walker used the pseudonym ‘David Folks’ during the 1990s, earned national college airplay with his CDs, Roadside Park and Refusing to View, and shared the stage with luminaries like Richie Havens, Richard Shindell, and Pierce Pettis. He toured widely, performing to a packed Bluebird Cafe in Nashville, and then traveling to Texas to sing for the 25thAnniversary Kerrville Folk Festival, where he received his fee from childhood folk-hero Tom Paxton. Music Hound Essential Album Guide to Folk Music called David “a singer-songwriter with a special ability to reach listeners on an emotional level.” He left the road in 2000, releasing his Bahá’i-inspired Summoning the Possible in 2010, and then reconnecting with the music scene under his real name as guitarist-singer for Seattle’s “The Bonafides” in 2017. Bonafides bassist, Larry Parisot, has an extensive background in classical, jazz, folk, and rock, and brings a fresh and unique approach to all his musical projects. Combining a sharp rhythmic instinct along with an appreciation for a good melody Larry constantly surprises and delights audiences with his playful and quirky approach.

Prometheus Brown (aka MC Geologic) is the vocalist for the Blue Scholars, and is also a highly-acclaimed spoken word poet. In the 2007–08 citywide election for Seattle’s Poet Populist, Prometheus Brown – whose real name is Geo Quibuyen – placed sixth with ninety-six write-in votes, the highest total for a write-in candidate in the, then, nine-year history of the competition. The son of Filipino immigrants, Quibuyen lived in various locations along the west coast and Hawaii as a child until his family settled in Bremerton, Washington. Geo feels rooted in his Filipino heritage and that there is an unfinished revolution among his people. His lyrics are drawn from experience, crafted for a connection to community, and working to uplift communities in general. He remains a strong advocate for the Filipino community all over the world, as an outspoken critic of US foreign policy, including its tough immigration laws and unfair corporate practices by Western business.