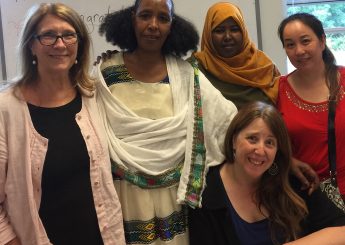 Right before the start of the pandemic, a Somali couple, Sara and Abdi, and their six children moved to Seattle.

When Sara first arrived, she was able to read and write and speak a little English but had almost no computer literacy. Her husband could not read or write in Somali or English. It was clear that Sara wanted to study English, but her life was very full taking care of their six children, ages one to fourteen.

Her priority was her role as a mother and homemaker and it was difficult for her to fit ESL classes into her life.

Her priority was her role as a mother and homemaker and it was difficult for her to fit ESL classes into her life.

Sara and her husband had started coming to class at ReWA shortly before the pandemic started. When English classes went online, Abdi came to pick up homework packets so they could keep studying at home.

Sara was too busy caring for her six children for remote ESL class, but her husband, Abdi, was eager to participate via video chat. He began practicing English with a ReWA volunteer, Linda, once a week and sometimes Sara would join in briefly.

In May of 2020, Abdi told me that his three kids in Elementary school had not received homework or computers from their school. I talked with one of his older daughters, found out the name of the 5th grade daughter’s teacher and contacted her. I explained that the parents do not use computers or email and asked if I could help by picking up materials or a computer on loan and bringing it to the family. I also shared the family’s address (with permission from Abdi) so they could receive homework. Not long after that, the kids got homework in the mail!

When Seattle Public Schools started official online classes in the Fall, they suddenly had five of their children at home all day, all doing classes on their school-provided laptops. Their apartment was small so they were often all in the same room.

While he was at work during the day, Sara was home, trying to keep the younger children busy and assisting the older ones as they struggled with online classes and technology issues.

I kept in touch with her via WhatsApp and video chat. We did some lessons this way and her kids came in and out. Sometimes the connection was bad and we’d get cut off. She said she wanted to do Zoom classes, but needed a laptop.

At the end of February, she got one of ReWA’s laptops on loan. After a short tutorial from ReWA staff, Sara was able to use Zoom on her “new” computer. She quickly learned basic computer literacy skills, as well as Zoom class skills such as how to mute and unmute her audio.

Our first Zoom class at 1pm was chaotic. Sara was trying to answer questions from her children, take care of her youngest, cook and use Zoom all with constant interruptions. I asked her if a later 3pm class would be easier and she said “Yes!”

Not long after that, I started a new class that meets twice a week, from 3- 4pm. Sara’s kids were mostly done with online school for the day, so she made plans for them to be outside.

It did not happen overnight, but I noticed the day when she was able to get through a full class without interruptions or distractions. She was completely engaged and focused. When there was a pause in the class, she suggested “Exercise!”, which is what students called our daily in-person class activity of following directions. I set aside my planned lesson and we did “exercise” on Zoom. I gave directions, like “Please stand up/sit down”  “Please show me your pencil”  “Please put your hand on your head”, watching the students on my screen and modeling the action if they didn’t understand. There was a lot of laughter!

From that point on, Sara was often the first student to show up for class and was ready to learn. She had paper and pencil ready and held her paper up to the screen so I could see her in-class writing. After class, she took a photo of her paper and sent it to me via WhatsApp.

Even throughout Ramadan, when some students are too tired from fasting to study, Sara continued to show up with enthusiasm and became one of my most consistent, dedicated students. She welcomed new students to our class, always texted if she was going to be late or miss a class and improved her English Speaking and Listening skills.

Sara worked hard to learn the computer skills necessary for Zoom ESL classes. She found a way to care for her children though a pandemic, with quarantine and online school and also prioritize her own education and language acquisition.  She became a leader for other ESL students and she learned how to be a student in a remote classroom. She worked hard to improve her English. When Sara first arrived, her ESL skill level was 1-B, almost a complete beginner.

Now, after a few months of Zoom classes, she is almost ready to move up to Level 2!

*note: student names have been changed