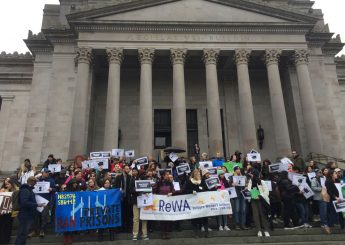 On February 5 ReWA gathered with hundreds of activists for Immigrant and Refugee Advocacy Day in Olympia. With policy flyers in hand, women and men, immigrants, refugees and native-born, met with their legislators and urged them to support several bills in the state Legislature, including:

During a lunchtime rally on the Capitol steps, speakers impacted by anti-immigrant policies told harrowing stories. First, a young Guatemalan woman said she was detained for three months, and a week after she returned, her husband was taken. He said he went to court for a minor traffic violation, but was grabbed by plain-clothed police and bundled into unmarked car. “My wife didn’t learn what happened to me for almost a week. It was very frightening, especially for our children.” 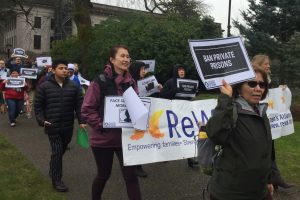 ReWA joined Advocacy Day in Olympia calling for ban on private prisons, to keep courthouses safe from ICE, and a moratorium on the government’s use of inaccurate facial surveillance technology.

A WAISN activist told the crowd, “We choose hope over fear and courage over cynicism. Thank you for standing in solidarity with us.”

After the rally, ReWA’s Executive Director, Mahnaz Eshetu agreed, “We cannot let fear control us. We can still march, we can advocate for our clients, and we will always stand with our immigrant and refugee community, because they are us. And we know our larger community stands with us.”

Later that afternoon in Washington State Supreme Court, Justice Steven González spoke in favor of the Courts Open to All bill. “No one should be afraid to call the police, to come to court (….) or be a witness, etc., for fear that there will be immigration enforcement in our state court houses.”

Back on the steps, the Guatemalan woman wiped away tears as her husband finished telling his story. His face was tense as he spoke of the impacts of the arrest on himself and his family. But then he looked up and took in the crowd; his face relaxed into a smile. He raised his fist and called out, “El pueblo unido jamàs serà vencido!”

The people united will never be defeated!