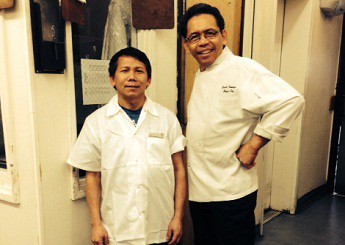 After spending 20 years in a refugee camp, Putra was given the opportunity to start a new life with his family in the United States.  Putra, his wife, and three children arrived in Seattle in the summer of 2011, speaking no English and with limited exposure to the world outside of the refugee camp.

Like many newly arrived refugees, Putra’s family worked hard to stretch every dollar they received from government assistance but Putra knew that he had to make a change if he was going to provide for his family.

That’s when Putra came to ReWA.  At ReWA, he enrolled in ESL classes and the employment program.  Putra worked hard because he knew that a better future hinged on learning English and finding a good job.

Putra’s hard work paid-off.  Shortly after enrolling in the employment program, Putra’s case worker helped him find an evening job at a local hotel, giving him money to provide for his family and allowing him to continue learning English in the mornings.  The past few months have been exciting for Putra.  He was selected as Employee of the Month and continues to excel in his ESL classes.  Putra’s family is also making the most of their new lives in the United States.  His wife is also learning English at ReWA and his children are all enrolled in ReWA’s Youth Program where they receive academic support and build community.  ReWA will continue to work with Putra and his family on their path to transforming dreams into reality.